#23: Life purpose, the future of work and alien spacecraft

"If you don’t believe it or don’t get it, I don’t have the time to try to convince you, sorry." Satoshi Nakamoto, founder of Bitcoin

It’s easy to get caught up in the frantic pace of life. It can be easy to mistake working hard for being successful and living successfully.

This article was a nice reminder that life is not just about hitting milestone after milestone. In the continual pursuit for more we often forget that real life is lived in the moment. We surrender today in the hopes of tomorrow, mentally living in the future, while our bodies are trapped in the present, leaving behind a life that is neither here nor there.

🔖 Read: Slow Down: You’re Not Falling Behind - Darius Foroux

The future of work

First was the Gig Economy. Now comes the Passion Economy. This era promises to not treat you as a physical pair of hands and legs, it instead rewards you for your uniqueness. Your personality, skillset and background all contribute to the unique brand and products you bring to the world.

This is something to mull over as we head into 2021 to give you some hope and direction on how you can position yourself in this very confusing world that’s lying ahead of us.

🔖 Read: The Passion Economy and the Future of Work - Li Jin‍

How to figure out your life purpose

Mark is back again dropping wisdom in this short video segment. I often get asked variations of this question myself, but I never seem to answer it as eloquently as Mark does. It’s clear he has thought about this one a lot.

I like how he looks at the idea from a practical perspective of a growing, changing human. He then shifts the perspective of the question, giving you a better frame to look at the world and life. This is some practical philosophy as its finest.

🔖 Read: How to find your life Purpose - Mark Manson

The aliens have already landed

This was a mesmerising, eye-opening interview between Joe Rogan and Bob Lazar, an engineer that was contracted by the military aircraft to work on alien spacecraft. Specifically he was tasked with reverse engineering the propulsion systems, which according to him was like “trying to hack magic”.

Bob has been speaking out on this topic for decades and has been ridiculed and lambasted. However, in recent years the military themselves have released footage and news about this to the public (see below!).

And if you thought the aliens only landed in the US, that was a myth. South Africa has way more UFO sightings than you’d expect. 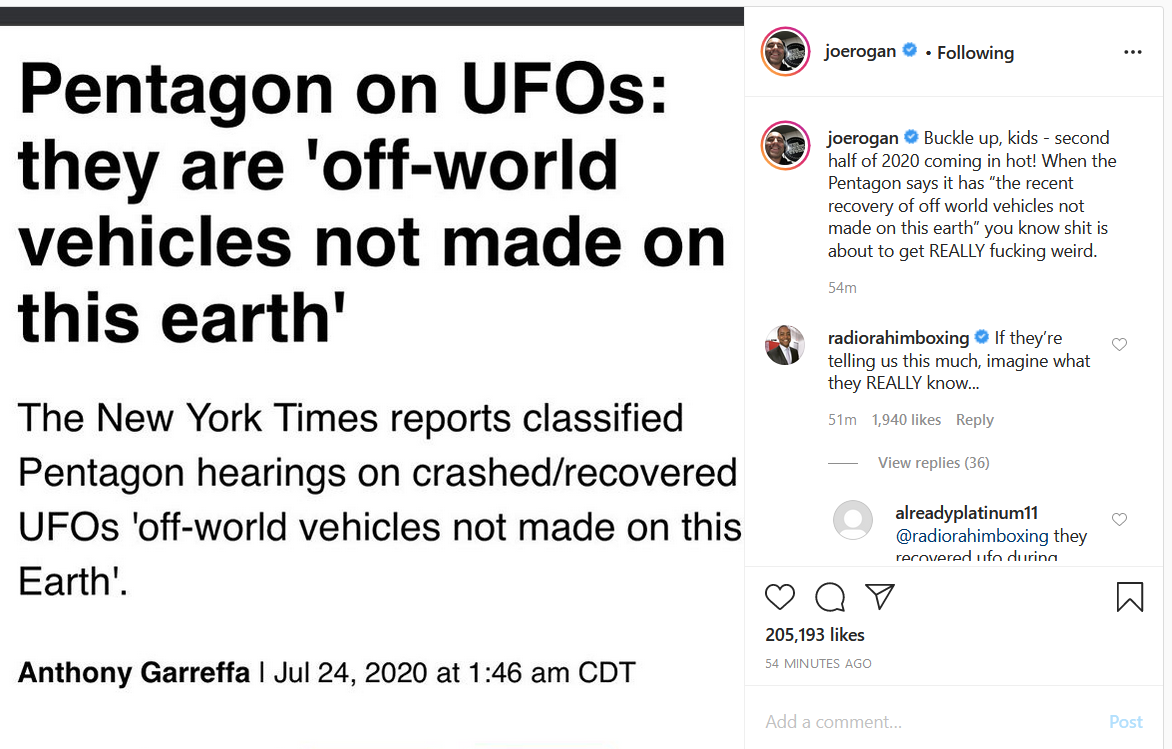