Experimentation is about learning

‍The Lean Startup was a famous book that came out in 2011 by Eric Ries. It was based on the idea that a successful startup can be built by using a repeatable process that emphasised learning. That process was fundamentally the scientific method.

The basic premise is that a startup is a learning organisation. A startup is defined as an organisation that's creating something new under conditions of extreme uncertainty. It does not know if and how it will achieve product-market fit. It has guesses at what the product should be and who the market is. So, to become successful the startup needs to learn the answer to product-market fit in the shortest time and lowest cost possible. The way it learns is through executing its activities within experiments.

This concept of experimentation can be used to improve any organisation or individual. In your own life and career, you may have general goals of where you would like to be. But like most people, you do not know the exact path you will take to get there. Figuring out those details are what experiments are for.

Experiments are the basis of learning. They are a great way to frame the process of improving yourself. It is low stakes. By being a learner in the field, you are expected to make mistakes and ask amateurish questions. If you fail, it's no problem. After all, you still succeed in 1) completing your experiment and 2) gaining knowledge.

Through this process, you will find the things you enjoy as you move away from those that you don't.

Having a good day starts with having a good morning. And to do so, it's important to at least have a plan for what a good morning looks like. In the article below I found a few themes that resonated with my own morning routine.

Be sure to check it out and try them out.

Do you have a knowledge system?

I've been thinking a lot about knowledge systems these past few weeks. As I ramp up my own processes for finding, storing and retrieving ideas I am constantly asking myself - How can I do it better?

In the article below, the author breaks down his decision making criteria behind two software, Roam Research and Obsidian. They function as thought processors or knowledge bases. They are both note-taking taking systems offering multi-directional linking between notes. I particularly like the idea of knowledge graphs and being able to visualize the connections between ideas in 3D space. But I come back to the more fundamental question - how would I use this in my knowledge process?

After testing out Roam, I found myself deciding to remain with my current tool, Evernote, for now. To remain effective I need to limit the number of experiments I'm running at any one time.

My Evernote currently has over 1,300 notes in it. This adds stickiness and makes it harder for me to want to switch. I also use it as a core part of my workflow which makes it a tougher component to change.

If I was starting from scratch though, the decision of key tool has to involve both Roam and Obsidian, as well as Evernote. I still think I will be using both of them in the future, especially when working in groups.

Many of you'll have asked me about getting into entrepreneurship, and the mindset changes needed to get out of corporate. This is something I learnt and am learning through the lessons of others and my own experience. With this newsletter project, I've been learning about content creators and their business model.

The article below shares some great insights into the different ways content creators make money. It isn't straightforward, since the primary consumers of content don't pay the creator directly. As a result, a content creator has to find other ways to create value from the attention and views of their content.

Content creation is something we can all do. Since the barrier to create is low it can be an easy experiment to run. If you have thought about creating content, why don't you give it a shot now?

It can be confusing when talking to other people about truth. This is because we are trying to refer to different types of truth by a single word. Painting it all by the same brush, as it were. The concept of metaphorical truth is something I came across a few months ago. It is an interesting distinction on a particular type of truth. Brett Weinstein explains deftly in the video below the concept of metaphorical truth.

As an example, the story of a porcupine being able to shoot its quills and kill you, while fascinating, is actually false. Yet those tribes that believed it, behaved safer in the presence of porcupines and thus had better survivability. So while the reality was the story is false, the truth was its actual effect to elicit a positive outcome by those that believe in it.

‍The takeaway: Many of the things people that believe are factually false, but by believing it they get receive some benefit. As a result, those beliefs get reinforced and passed on.

Getting advice from mentors

I have always had, in the traditional sense, a little difficulty finding mentors. It always felt awkward to me to seek out a formal relationship. This is more true when that person is your senior and even more so when they're a stranger. That's not to say I do not have influences and take advice and inspiration from others. I choose to do it in a way that is more indirect.  Derek Sivers, in his article below, shows that finding and getting advice from mentors is not that difficult. You just have to be a little creative.

This pandemic has made it clear the level of civilisation we are actually in. More so, it made it obvious that the people in charge do not know what they are doing. In some cases, they are consciously acting against the people's interest. Since the breakout of the virus, I have tried getting accurate information on it and the response. I still am trying. It's hard to make sense of the busyness that's going on.

One name has come up many times.

It's mention has a polarizing effect on those that hear it.

The story that we all know, that's on the surface, is that he made his money through Microsoft.

But what is he doing now? And what is his role in the fight against this virus?

This documentary raised some interesting questions. It also provides some evidence that the Bill Gates we know is not the innocent, world-saving billionaire he portrays himself to be.

📺 The Corbett Report: Who is Bill Gates? (2hrs) 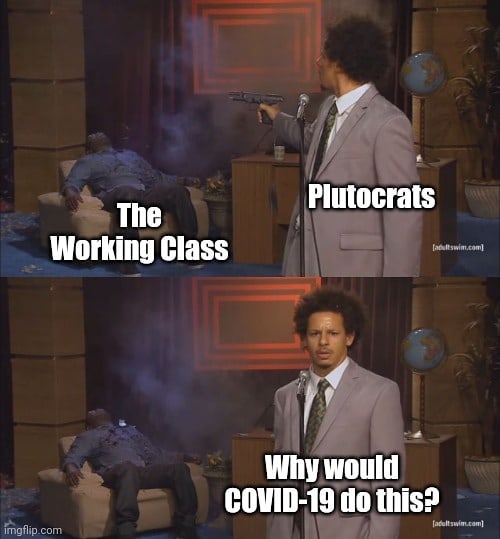